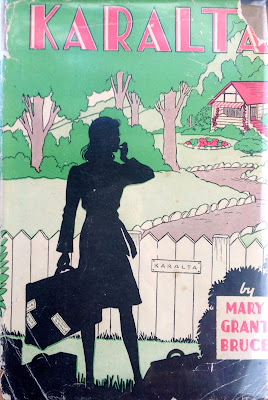 When I was a kid my favourite spot was up a mulberry tree. There was one branch wide enough to lie on and I could pick mulberries while I read, which is why my favourite book still has mulberry stains on it. It’s name is Karalta by Mary Grant Bruce. It was Mum’s book before I got it, and published in 1942. Books back then had soft thick paper and the illustrations looked like photos, but more beautiful. It was about an English girl evacuated to Australia who captured a Nazi spy with the help of an Aussie soldier, but mostly I think it was about ‘Karalta’, a farm near the beach. I loved ‘Karalta’ even more than the story. These days I have my own ‘Karalta’- it has a swimming hole in the creek, not a beach, and a mulberry tree. But this summer I’ll be reading down at the creek- until the wombat finds me, anyhow. Wombats like books too. They are interesting to chew.


A review for Melissa, who asked!

Karalta by Mary Grant Bruce is, it appears,  Jackie French's favourite book.  It is certainly exciting, and is an interesting book for youngsters to learn about WWII in Australia.

It's about Jan, and English girl, who is evacuated to a lovely beachside home called Karalta.  Jan is prepared to hate everything about Australia and its people, but that is impossible at Karalta where she meets a kindred spirit in Flisty her guardian, and welcoming friends all about her.

Jan befriends a young dispatch rider named Gerry, whom Minnie Bruce based on her son Jonathan, who served in World War II in the Australian Military Forces, and later the Second Australian Imperial Force’s 7th Division Signals Corps in the Middle East.  Through Gerry, Jan learns about Fifth Column sympathisers engaged in espionage and sabotage.  It appears that someone is telling military secrets.  In trying to solve the mystery, Jan finds herself in some pretty exciting situations!!  Of course, being a fluent German speaker helps Jan a little as well...

Minnie Bruce is criticised as being racist, conservative and class - ridden, but I love the way her strong, capable female characters manage their lives. We read Karalta as part of AO6's focus on WWII, and enjoyed it very much.  It's out of print, of course.  Try my friend Abe for copies.
Posted by Jeanne at 19.8.13