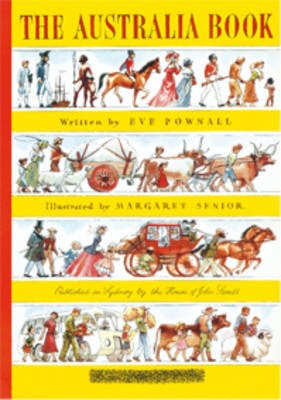 Back in 2006 as a bright eyed and crunchy new Charlotte Mason convert, I placed my first order with Abe Books. The order was for The Australia Book by Eve Pownall, and I paid the exorbitant price of $25.00 +delivery. I purchased it because it was recommended as the Australian History Spine by all the experienced Charlotte Mason mummas that I was avidly reading - okay -devouring online each day, and it was out of print, and Abe had only two available and this was the cheaper of the two, and clearly I needed it. I was filled with the zeal of a new convert. I was going to homeschool my then four year old daughter, and I was therefore going to need every recommended book that was available regardless of price or availability, or clearly I would fail.

Notice that I am not saying that it is not a Good Book, because it is. When it won the 1952 Children's Book of the Year Award, it was described as 'one of the most beautiful and original books ever published for children in Australia'. They were right - and despite all the advances in children's book publishing that have occurred since 1952, the statement remains as true today as it was then.

The Australia Book is a good book. You may chose to use it in educating your kids. Just don't call it CM. Because it is not.

The Australia Book is not living because it contains the full sweep of Australian history from the first Australian right up to WWII in short bite sized snippets accompanied by those beautiful illustrations of Margaret Senior's that everybody adores. You struggle to read it aloud, and a child would have real difficulty in narrating it because there are so many facts with nothing fleshing them out. 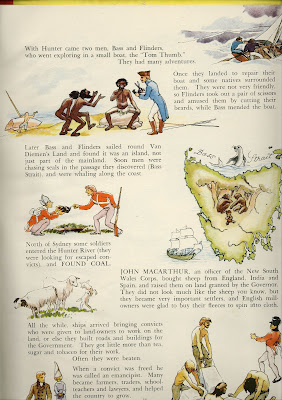 Take, as an example, the section I've scanned above. Here it is written out starting at the bottom of the previous page:

When Captain HUNTER, the next Governor, arrived in 1795 he brought the first windmill, which turned out flour much more quickly.

A few children went to school in a little building that was a church on Sundays.

With hunter came two men, Bass and Flinders, who went exploring in a small boat, the "Tom Thumb." They had many adventures.

Once they landed to repair their boat and some natives surrounded them. They were not very friendly, so Flinders took out a pair of scissors and amused them by cutting their beards, while Bass mended the boat.

Later Bass and Flinders sailed round Van Diemen's Land and found it was an island, not just part of the mainland. Soon men were chasing seals in the passage they discovered (Bass Strait) and were whaling along the coast.

North of Sydney some soldiers entered the Hunter River (they were looking for escaped convicts), and FOUND COAL.

JOHN MACARTHUR, an officer of the New South Wales Corps, brought sheep from England, India and Spain, and raised them on land granted by the Governor. They did not look much like the sheep you know, but they became very important settlers, and English millowners were glad to buy their fleeces to spin into cloth.

And there I shall stop. As a little exercise, close you eyes right now and see how much of that you can narrate back. Pretty hard, isn't it? And what has the school building business to do with anything at all?

The Australia Book was reprinted in 2008, and is now readily available for $34.99. You can buy it if you want. It's a pretty nice book to have on your shelves. Your kids might like to flick through it too. It's just not a CM Living Book, so don't expect them to narrate it back when they're done.

So which Australian History Spines are Living Books then, I hear you ask in despair, your hands thrown up in frustration. Well, this was going to be a post on just that, only I've taken too much time in the introduction so I'll save that for another post. Save to say, don't despair dear friends, they are out there, and I will tell you what I think they are very soon.

In the mean time, have you used The Australia Book in your CM inspired homeschool? Was it successful? Do you agree with my appraisal? Have I been too harsh? Do tell.
Posted by Jeanne at 16.6.12