The Battle for Gaza 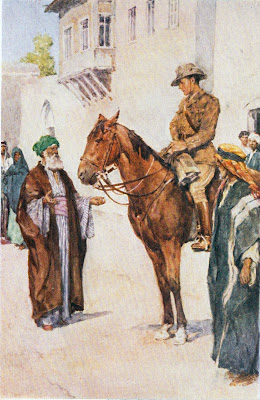 At the end of Chapter 16 of Reverend Joseph Bowes' novel, The Aussie Crusaders, its heroes, Major Jack Smith and Sergeant Jock McThirst have escaped from the Bedouins and Turks that have held them captive for much of the story up to this point and have rejoined their regiment in the Australian Lighthorse in the lead-up to the taking of Gaza.

At this point in the book, where the action turns from  the fictitious but highly exciting escape to the account of the actual fall of Gaza, it seems Rev. Bowes realises the need to add little historical, geographical and military detail to his narrative.  He does it well, in the form of letters home and interesting acecdotes, but his intention is evident, I think.  Normally I dislike vehemently books where an author tries to cram information down his readers' throats thinly disguised as a story, but Bowes manages this extremely well.  (Not so Mary Mapes Dodge in her surprisingly well acclaimed novel, Hans Brinker; or, the Silver Skates: A Story of Life in Holland, which has its pages cram packed with must know historical and geographical information about the Netherlands that is completely irrelevant to the story.  Ugh.)

Anyhow, the following paragraphs from Chapter 17 about Gaza and its historical importance, rather than its military one as gateway to Jerusalem and the Ottoman Empire, absolutely fascinated me, and I thought I would share them here.  Maybe you will find them interesting as well.


What soul-stirring memories cluster around that ancient town!  From time immemorial she has stood on the great warpath of the nations, and was to Africanders the gateway to Asia.  What Damascas was in the north, that Gaza has been in the south of Palestine; an entrepôt, receiving the trade from all routes stretching from Egypt to Arabia.

What conqueror has not seen he?  Those mighty Pharaohs, Tothmes and Rameses; Alexander the Great and his ten thousand invincibles; and Pompey with his Roman legions.  By this gateway, also, Sennacherib and Nebuchadnezzar entered Egypt.  Later on the streets of Gaza echoed the footsteps of Richard Coeur de Lion and his crusaders, in his campaign against Saladin.  After him came kings and innumerable nobles from all countries, culminating in the savage onslaughts between the Knights Templars and the Saracens.  Last of all, but greatest of all in military genius, came Napoleon in the spring of 1799, on his way to the Euphrates - then back again, making a holocaust of blood and fire to minister at the shrine of his insatiate ambition.  Here Sampson the Strong performed two of his greatest exploits, and here, too, the great Jewish patriot and hero, whom one has called the William Wallace of Judaism, Judas Maccabeus, fought some of his notable battles against the Syrians.

...This was the place the Commander-in-Chief of the British forces was asking his men to seize.

We're reading The Aussie Crusaders as part of our Australianised AO5.  The curriculum this year covers the period of history that includes WWI, and the significance of this war on Australia's national identity and its newly emerging status as a federated nation independent from Britain makes it more important for Australians to study in depth than for Americans.  For them it is the Civil War that consumes their time and interest here.

The Aussie Crusaders has been a valuable adjunct to our studies this term, as well as being a thrilling adventure.  I recommend it.  Of course it's out of print, but Abe has a few copies.
Posted by Jeanne at 24.10.12