Ned Kelly and the Green Sash 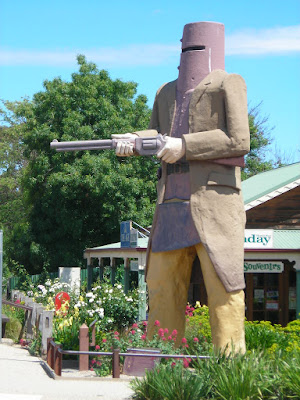 Who is Ned Kelly to you - hard hearted murderer or misunderstood victim of a corrupt police force? Generally there is no grey area - most Aussies have a pretty clear idea on which side of this argument they lie.

Either way, he was once a kid who rescued a classmate from a flooded river. The boy's parents were so grateful that they awarded Ned a green hero's sash. In their eyes at least, Ned was a hero.

My grandmother was born only a couple of years after Kelly was hanged, right in the middle of Kelly country. To her still traumatised family, the Kelly family were vile killers. She perhaps unwittingly passed this sentiment on to us. I certainly agreed with her anyway.

It was only after reading Peter Carey's True History of the Kelly Gang - a fictional account that may or may not be true - that I first thought about Kelly's early years. In the book, the green sash is a symbol of young Ned's modesty, courage and goodness.

For me at least, the black and white began to take on a definite tinge of grey.

I can't wait to see Ned Kelly and the Green Sash, the new book by Mark Greenwood and Frané Lessac . You only need to read Simpson and his Donkey to know that this is going to be a lovely book.

For me, it comes at a perfect time. We'll be reading Frank Clune's Ned Kelly next term for Australian history. This lovely picture book focusing on Kelly's early years and the fascinating story of the green sash should be a great addition.

Perhaps we could travel to Benalla and see the sash itself. That would be a bit of fun!

In allowing Ned to speak through his own voice in the pages of his True History, Peter Carey in effect offered him a retrial. As the jury, I'm confused. Is he a monster or not? To be honest, I don't know now what I think.

I wonder what Jemimah will decide.